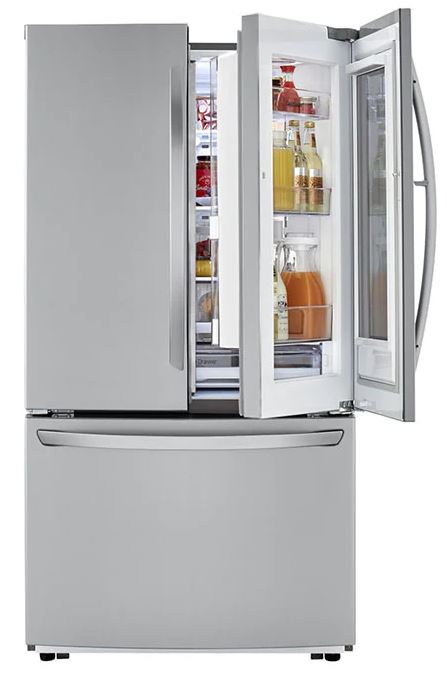 Refrigerator-freezers are among the most common household appliances in the world.....

Refrigeration consumes about 6% of the total energy generated in the world and accounts for about 14% of the total household energy consumption.

Polyurethane foams became widely used as refrigerator insulation in the mid-1980s. Reduced energy consumption was a primary driver, and the increased efficiency of polyurethane insulation allowed manufacturers to thin the walls of the units, giving consumers more interior space with no increase in exterior volume. In fact, modern refrigerators and freezers consist of a sheet metal outer casing and in between there is a layer of rigid polyurethane foam that acts as both a structural and an insulating material. Rigid polyurethane foams maintain the inside temperature of the refrigerator, and thus reduce the consumed energy.

The biggest reason why polyurethanes are used to insulate freezers is that of their low thermal conductivity. These plastic foams are structurally robust and stable, thus they can withstand the extremes of cold temperatures. Another reason is that they are cost effective insulations. Aside from that, polyurethanes are lightweight in nature, making them easy to transport and install. This helps to significantly cut down transportation and installation costs. In addition, polyurethanes provide a watertight seal around freezers hence, users do not have to worry about corrosion and rusting of underlying metal panels. Polyurethane foam withstands physical attacks and stresses as well as performs well in load bearing and thermal control applications.

The main requirements of foam systems for the manufacture of refrigerator cabinets are:

During refrigerator manufacturing, the polyurethane material is injected between the steel outer case and inner plastic liner. It is injected as a liquid, and over a short period of time (around 30 seconds), expands over 30 times its volume to fill the space between liner and outer case. The same process is used to insulate doors. The adhesive properties of polyurethanes ensure a firm bond between the inner and outer walls, and also help prevent heat exchange between the interior and exterior. 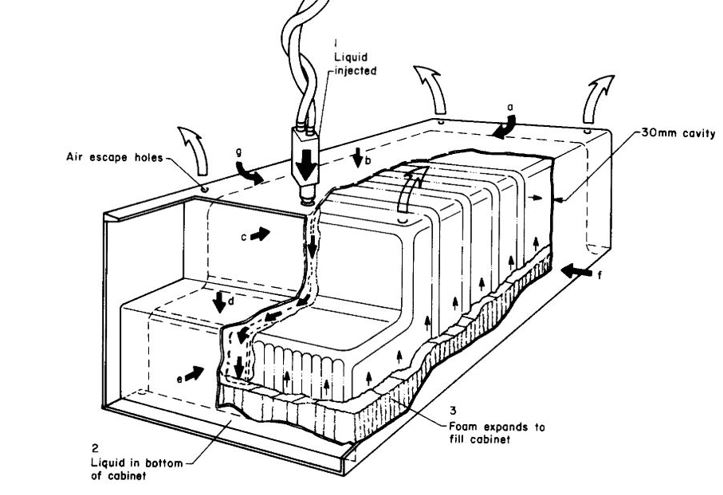 Closed-cell PU foams lose their thermal resistance over time because air components diffuse into the foam cells and low-thermal-conductivity gases (e.g., cyclopentane), used as blowing agents to manufacture the PU foam, diffuse out.

When rigid polyurethane foam is used as a thermal insulation, it is important to evaluate the thermal insulating properties. Most values of thermal conductivity, i.e., about 65–80%, include thermal conductivity of a gas or gas mixture. This basic property of thermo-insulating polyurethane foam also depends on the type of gas used in production and its diffusion rate from the product. This gas in the cells is replaced by air over a short period of time, so it is very important to evaluate the change in this parameter over time. The thermal insulating properties of rigid polyurethane foams result from the combination of a closed-cell foam structure and cell gases that resist heat transfer. The following figure shows the relationship between K-factor of each of the blowing agents with mean temperatures. 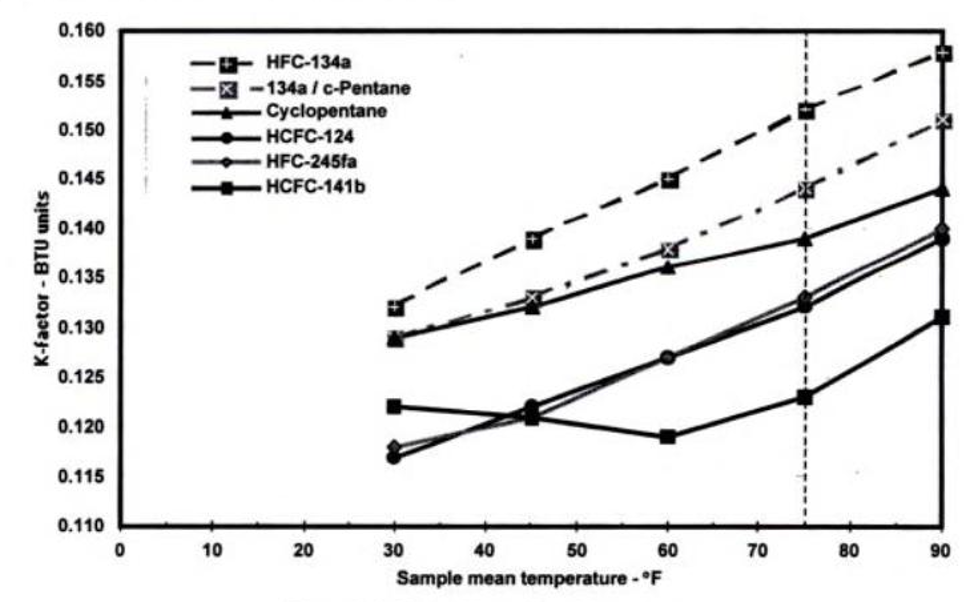 K-value represents the thermal conductivity of a material, so the lower the K-value, the better the insulation is for a given material thickness and set of conditions. Furthermore, another important thing to know about the K-value is that it changes depending on the mean temperature (the average of the temperatures on each side of the insulation). As the mean temperature goes up, so does the K-value. So, K factors are reported at one or many mean temperatures. Simplified, a K-value (sometimes referred to as a K factor or lambda value λ) is a measure of the thermal conductivity of a material, that is, how easily heat passes across it. It represents the steady-state heat flow through a unit area of a material resulting from a temperature gradient perpendicular to that unit area. This parameter is also depending on physical properties of the material, water content, and the pressure on the material and it is independent of material thickness.

According to ASTM C177, the testing apparatus that determines the K factor of an insulation material places a sample of the material between two plates, hot & cold, and the average of the surface temperatures of those two plates equals the mean temperature. Then, the following equation can be employed for K factor calculation:

The insulation performance of a product is commonly measured using three thermal values:

In conclusion, polyurethane foams are ideal choice for the insulation of refrigerating appliances. The material has been designed in Imen Polymer Chemie Company. For more and detailed information feel free to contact us.